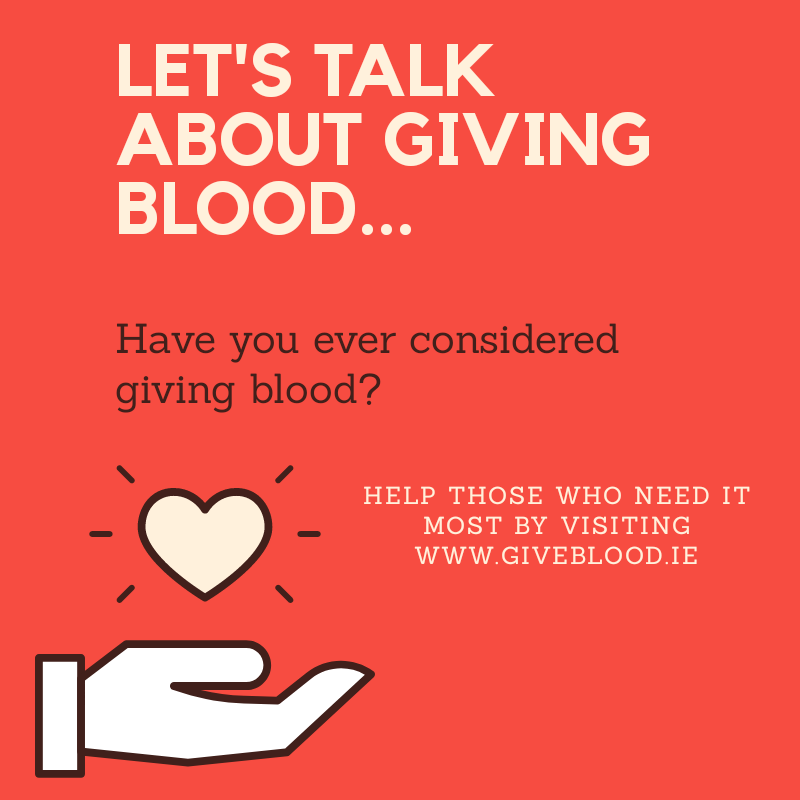 Recently I gave blood. This is not something special or something new, or at least that’s what I believed when I went into the clinic. Due to my job, I understand the physiological makeup and function of blood and its importance but that is about as far as that goes. I’ve never received blood or been in a position where I would have to worry about it. I have had surgery and done all the rehab imaginable but I had thankfully never been in a position where I needed to receive blood. I have given blood only a hand full of times even though I personally have a rare blood type for Ireland, B+. I never did this as a result of not wanting to but because like so many other things I just assume someone else will do it and sort that out.

Blood donations are still a very new medical process only being something available after we finally understood what our blood is made up. Plasma, platelets, hemoglobin, micronutrients, red and white blood cells and a ridiculous number of other components. But it was the actual reality of what these donations mean that really surprised me. Everyone that people probably receive donations after accidents or in surgery, but it was also the conditions and illnesses that we never hear of that really desperately need it. I spoke that I planned to go to donate and a father of a girl who needed blood donations at a monthly basis sent me a message thanking me as if I was the reason his daughter stayed healthy. Which is when it struck me, that these donations are just some nice gesture that you can do maybe once a year or every few years. These are daily necessities that save countless people and help many to fight on.

With this in mind, I did a little more background learning into what Ireland was like to donate blood. I was pretty surprised when I tried to check and see what we were like to give blood but I ended up not finding a lot about the numbers. What I did see from my searching was that Ireland has in recent years dropped in its donations of blood. As younger people are now eligible to donate many of them have little to no knowledge that they can or should give blood. Many don’t know where their closest clinic is or their blood type.

So here is a quick rundown, everyone is broken into several blood types, A, B, AB, and O, with everyone being + or -, this is called the rhesus factor. O- are universal donors and their blood can be given to anyone and AB- can receive blood from anyone. You can get this checked in any clinic and you receive a card about it afterward. You can give blood if you’re aged 18-65 and have never received blood yourself. There are a number of other factors which you will ask prior to giving blood for the first time such as your medical and geographical history but this only takes maybe 15 minutes. after you’re officially a donor.

Your blood can be tracked and you can find out where its stored and what its being used for. You will be under supervision throughout from some of the nicest and most professional nurses and doctors youll ever meet and will be there for less than an hour. After you give blood they even check up on you to make sure you dont have any complications. You can give blood every 3 months and can make a booking after each session. Now Im not asking you to give blood every 3 months but if youre able and youre between the age of 18 to 65 then maybe even think of giving it a go even once. You very might end up saving someones life by simply sitting on a chair for twenty minutes. As we become a more inter connected society it at times can come across that these kind of issues are in the past and that someone else will sort it out but it is this very reason that means we need to try a little harder at times.

Be it blood or platelets or even bone marrow, which is another far more complicated kettle of fish, but as we become a more open society where doing this kind of things is more about helping others rather than merely showing face maybe try and make sure you don’t just leave it up to someone else. Make sure you even have the knowledge of what your blood type is because you may save your own life by doing so.