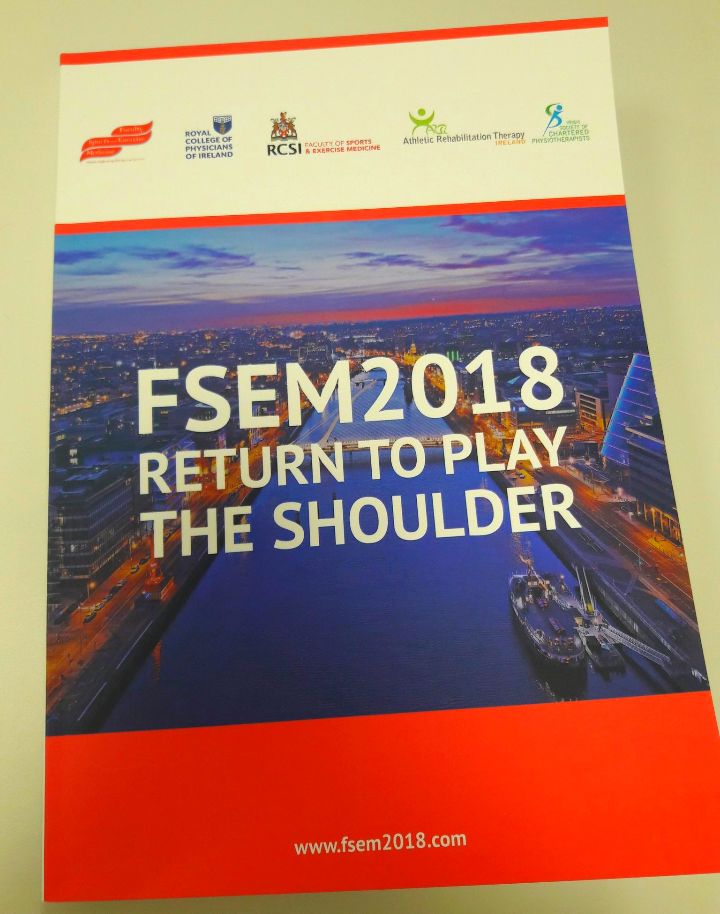 Last week I attended the Faculty of Sports & Exercise Medicine (FSEM) conference at the Royal College of Surgeons Ireland. This year the Conference had a focus point in the return to play post shoulder injury. For those of you that don’t know what FSEM is – it’s an annual gathering of doctors,  surgeons, researchers, physiotherapists, and of course athletic therapists, presenting findings from studies as well as new methods of rehabilitation and surgical interventions to conditions and injuries. We basically come together to discuss the latest developments in the field of physical health. This allows for a body of knowledge, that would normally never be dispersed to be tangible for all.

There was some savage speakers this year. With the likes of Eanna Falvy, the Irish rugby team doctor who spoke about on field management and the occurrence of shoulder injuries in rugby. He interestingly   spoke about how rugby has evolved from its beginnings to something barely comparable to what it once was pre professional era. Body size, strength, play style and aggression have all lead to an increase in injuries especially those in the shoulder where the ideal of aggressive rugby in the breakdown via the poaching of a ball and active clear out has lead to an increase in shoulder injuries. He also spoke of the need to prepare athletes for the season ahead of them as you cannot prepare the athlete mid season, when training load and type are dictated by schedules and physical conditions there and then.

Edel Fanning described the return to play for contact athletes after shoulder stabilisation surgery. She described how the loading of the uninjured side and reductions in strength from one side to another or from internal to external rotators can make it difficult for athletes to return to a position where equilibrium is achieved once more. She also showed how rather than basing rehab plans off pre described time frames and rather base it off objective and measurable improvements from the athlete.

Nick Grantham described a very different int of view coming from a strength and conditioning background but showing how no one field within health and fitness is isolated. He described the strength, power and honestly versatility of an athletes shoulder using downhill biking as an example and showing how specialised a certain activity can make an athlete. He described rehab in a far less rose tinted light than it is often portrayed with the focus being placed on the avilable resoucrces and pjysical attributes being available to each and every specific athlete. We often to much on the on the structures that have become injured rather than the reason why they have become injured sometimes trapping ourselves in a loop of repeated returns and failures of tissues.

Probably my favorite piece of information from the entire conference which states that essentially just following information previously recorded and not catering rehab as an individual experience will not produce outcomes where rehabilitation’s effectiveness is maximised. Essentially, everything is situational and so you cannot paint every injury or condition with the same paint brush. Sean O’ Brien also spoke on his professional career and often as therapists we can forget but the athlete or patients point of view regarding their injury and rehab.

In all i really thought the conference was great and a huge amount of knowledge and opinions were expressed. Not all pieces were directly relatable to every field of expertise but something to better your skills as a practitioner  was present in nearly every talk, workshop or conversation on the day.